Did you know that Tim Duncan, the all-time leader in the Spurs for points scored and games played, has chronic tendonosis in his knees?  He also has bone-on-bone arthritis.  He lives with the kind of crippling pain that motivates people to let a surgeon use a power tool to cut out their knees and put in a metal replacement.  And not only does he still walk around on his own with this crippling pain–he plays professional basketball.  Up and down.  Jumping, twisting, running from one side of the court to the other, landing his 6’11”, 250 pound frame down hard on the wood floor.  This man. . . is amazing.

How about the Kenyan runners featured on RadioLab?  The Kalenjin are a specific tribe within Western Kenya that have produced an astonishing number of elite runners.  David Epstein of Sports Illustrated said, “”There are 17 American men in history who have run under 2:10 in the marathon. There were 32 Kalenjin who did it in October of 2011.”  They are almost ridiculously dominating in distance running–often coming in first, second, third, fourth and fifth in both women’s and men’s races.  Part of it is that they are genetically perfect running machines.  But another part of it may be that when they are teenagers, they have to go through a rite of initiation into adulthood that culminates in being circumcised with a sharp stick.  And if they even flinch–one little whimper–they are labeled a coward and not fit to be a contributing part of society. To prepare for this, they inflict pain on themselves in horrible ways and learn to deal with it stoically.  They train themselves to handle pain; and anyone who has tried a long distance run will tell you that this is an indispensable asset and may be what gives the Kalenjin a winning advantage.

I’ve been thinking about these two stories quite a bit lately because I have wanted to give up when things get hard–especially if I am just doing something for fun.  Like this blog, for instance.  After the slaughter of the babysitting post, I felt beat up.  I have never felt so exposed and vulnerable.  I started getting mini-anxiety attacks whenever I would open my inbox.  My muscles would tense up, I would breathe very shallowly, my heart would race.  I hated my computer. But I couldn’t stop myself from seeing what new hateful comment had been posted on my facebook page.  I stopped all comments from coming to my inbox.  I didn’t even venture into the Huffington Post’s republication of it.  I was traumatized.  Of course, there was good.  Lots of good came from it.  But the good doesn’t erase the bad.  It was just nice to read while I was tensed and sweating at the computer.  And so I decided–why in the world am I doing this?  What’s the point?  I could be sleeping in.  Heck with it, I’m going to sleep in!  And for pretty much the past month, I’ve been well-rested.

This week, another dramatic experience, this time with the people at my kids’ school, made me want to throw my hands up at the PTA and say, “See you later.  Good luck for the rest of the year.”  Why am I putting myself out there, trying to be helpful and civic-minded and all I get is criticism and negativity?  I feel like I could do more good without being wrapped up in the bureaucratic nonsense of the PTA. My equilibrium is just now being restored from the battering of the past several months, I don’t need energy vampires sucking it all away again. Sayonara.

And then, my wonderful friend sent me an insightful email. It reminded me of Tim Duncan and the Kalenjin.  She compared my negative experiences to the people of Ammonihah to whom Alma went to preach.  They threw him out of the city and told him never to come back.  As he was wiping the dust from his feet, an angel came and commanded him to go back and preach again.  So he hurried back and tried again.  She reminded me not to give up on my objective, and to hurry back in order to make the difference that I intended to make.  And so here I sit, composing another blog post, hoping it will never go viral again.  But also intending my voice to be heard and my faith to ignite the faith of others.  It is a worthy objective and so I will press on.  PTA, *sigh* I will stick it out till the end of the year.  My objective in being involved in my kids’ education can be served in numerous ways. Next year I will try to make a difference in a more personal way.  The ability to persevere is just as important as the wisdom to know what is worthwhile and what is not.  It is mindless exhaustion to believe that we must push hard at everything; but we ought to learn to withstand negativity if the activity has a worthy objective.

We all face challenges in doing the things we set out to do.  Physical pain, emotional drain, criticism, feeling unappreciated, being forgotten or even actively persecuted.   But the ability to persist through the pain and frustration and continue unwavering on a path is the thing that differentiates Tim Duncan and the Kalenjin from the rest of the world.  It’s not necessarily skill, or incredible talent that helps the best rise to the top.  Their success comes from a refusal to give up even when things are horrible. 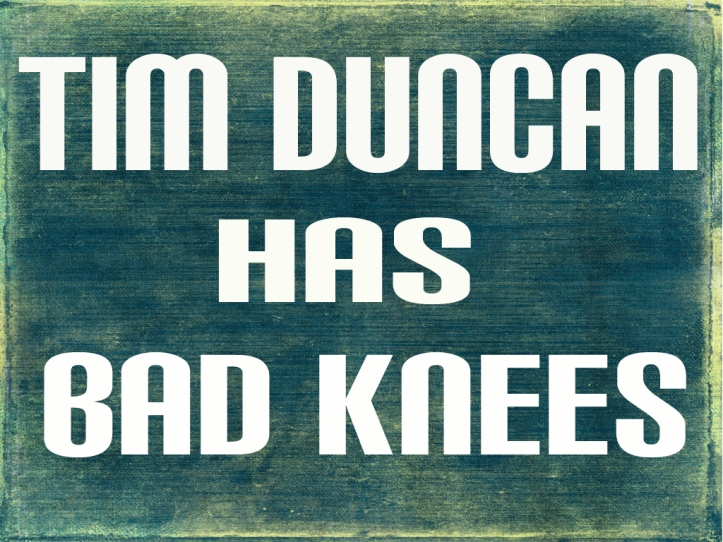 While I love “We Can Do Hard Things” as a motto, this specific reminder helps me not feel bad for myself and push through pain in order to see my objective through to the end.

Ideals are stars to steer by; they are not a stick to beat ourselves with.
--Barbara B. Smith

What are you looking for?

In Defense of Women